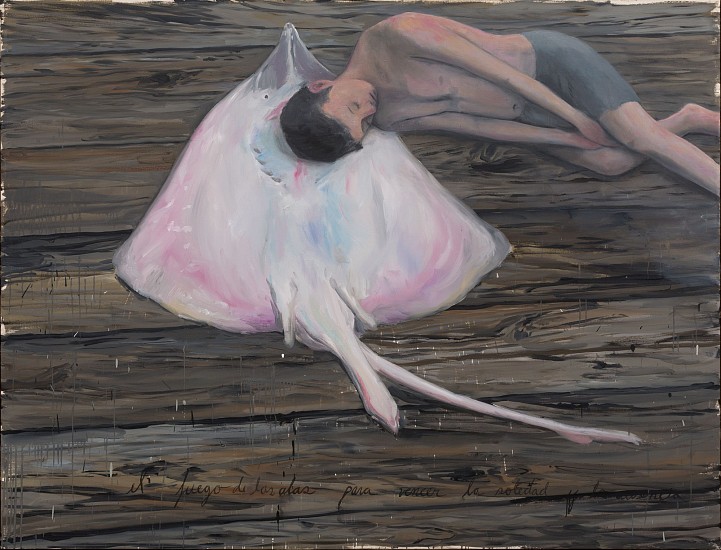 Robischon Gallery is pleased to present the gallery’s first solo exhibition of highly acclaimed Cuban-born artist and author Enrique Martínez Celaya: “The Boy: Witness and Marker 2003 – 2018.”  The extensive presentation, selected and curated by the artist, investigates Martínez Celaya’s re-emerging theme of a boy and the psychic or philosophical forces which surround. Unfolding with a strong sense of the chronological, the new and earlier works reflect a poetic exploration into the nature of vulnerability, power, confidence and fear, while allowing the physicality of each medium employed – oil and wax, bronze, watercolor, wood, tar and straw – to carry with it a sense of the ineffable. Martínez Celaya states, “Since the mid-90s I have been using the image of a boy coming of age, still moored in childhood, but already half-embarked on that journey to adulthood from which he will not return. This reference has appeared in my paintings, sculptures, drawings, photographs, and writings, and the exhibition at Robischon Gallery is the first one dedicated to the boy as image, concept and metaphor. It is an expansive effort bringing together work from 2003 to the present, including paintings and sculptures that have never been seen before.”

Beginning the exhibition on a reflective note, one of the earliest works is a large-scale photograph on canvas titled Boy at the Shore from 2005. The boy stands on a beach as if in a trance, wearing pajamas of embroidered blue flowers on white diaphanous fabric, his back to the vast ocean behind. The sheer fabric draws attention to the poignant vulnerability of the small child in clothing that offers little privacy or protection from the elements. Located next to the photograph is a work entitled Vitrine with Flowers, 2005, comprised of a similar pair of pajamas embellished with pinkish-red blossoms. In its proximity to Boy at the Shore, Vitrine with Flowers heightens a shared sense of absence with the filmy fabric akin to a vitrine, as the title suggests, a transparent vessel alluding to the illusion of permanence.

Within many of Martínez Celaya’s exhibited works throughout the gallery, the boy can be found primarily alone and in a variety of allegorical scenes.  Briefly described here, a captivating painting from 2015 titled The Prince, the boy’s image is richly layered with arms upstretched and hanging from a verdant, leafy tree branch at sunset. The boy holds the viewer in his gaze – suspended, attentive to the present moment. Nearby, in an impressive oil and wax painting from 2013 - 2015, The Relic and the Pure, a swim-suited boy rests his head upon the pink-tinged white underbelly of a large skate on a broad wooden surface. An evocative script element, in Spanish, reveals itself to read, “the fire of the wings to overcome loneliness and absence.”

Culminating the exhibition with both The Traveler, 2016 and The Wager (or The Dreamer), 2018, Martínez Celaya animates the signifier of the boy through the sculpture’s elemental materials: a tree branch, tar and straw, alongside the painting’s potent image of the boy’s arising. Between ground and heaven, the bird forms offer an integration of the two, as nature and spirit become one. As evidenced within the exhibition’s twenty-one artworks, Martínez Celaya’s pursuit of territory that is both relatable and ambiguous, invites the viewer to expansively consider and decide whether the boys’ environments are reflective of the imagination of a child or something else entirely. The artist writes of his subject, “As I understand him, the boy is weary and excited, and he knows both less and more than he thinks he does. He is somewhat aware of the possibilities and risks that come with pulling away from the land of childhood, but he cannot know the storms ahead nor has he tested his resolve or his resilience. Those boys who are familiar with disenchantment might already be acquainted with doldrums and hurricanes, as well as with their own limits, but even these precocious princes of bruises cannot anticipate all that awaits. The boy’s body and his heart are summoned by the future, though his mind, his algebra of categories and understandings so shaped by the past, is likely to lag behind.”

In these select works and in many past series in which Martínez Celaya’s boys, as well as girls, are his subjects, children are juxtaposed with different elements or fragments intuitively driven by the artist’s poetic sensibility and the corporeality of his materials. Disparate references offer the viewer another way in, as does the quality of the artist’s canvas surfaces with their contrasting applications of pigments, undefined borders and the unexpected use of tar and straw in the sculpture.  While the subjects reflect a coming-of-age and the shaping of identity, they also spark broader notions of life’s transitions and the promise of change. Martínez Celaya is unafraid to acknowledge a sense of vulnerability in all his subjects – and in turn, a desire for contemplation and awareness is required to receive it. With his haunting imagery, use of language and a compelling sensitivity toward the materials, the artist references that which exists beyond the boy as well as the edge of the canvas. Reflective of all media in some sense, but speaking to both subject and approach in painting, Martínez Celaya concludes, “Painting itself participates in this becoming, and as such, the boy can be understood as an allegory for painting—or better yet, as a stand-in for painting. Painting exists in that middle ground between illusion and truth, and in the case of representational painting, meaning comes to be in the space between what a painting seems to be and what it is: it is paint and it is a boy, it is the appearance of a horizon and the move of a brush. Painting, like the boy, is that state of being that is both moored by the materials of paint and its history, and summoned away by the possibility of truths still to be unconcealed.”

Image: Enrique Martínez Celaya The Relic and The Pure oil and wax on canvas 60 x 78 inches